2 years ago in Expert Insight

Heather Hill, a professor at Harvard’s Graduate School of Education, is the researcher behind the Mathematical Quality of Instruction (MQI) Framework and the associated MQI Coaching model. Fun fact: She’s observed more math classrooms on video than any other researcher in the country!

Heather shared how observing teaching through video blossomed into the MQI framework in her interview with Edthena’s Adam Geller on the PLTogether blog. It turns out that video observation and video reflection play a very central role in the story of developing the MQI protocol and MQI Coaching.

The way Heather explains it, even if educators had a perfectly and precisely defined framework for understanding their teaching practice, it would still not be as effective as using a video to analyze how an educator should respond. For example, what does “responding to student mathematical thought” mean to you? Does it mean the same thing to your colleague? How do you know?

Having a video example of a teaching practice creates a concrete reference point for the teacher and coach when they discuss what they’re observing in the teacher’s own teaching and with their own students. Having the video removes the chance of misinterpreting the definition of how you should respond to a particular moment in the classroom.

“There is no true common language to describe teaching, so watching teaching videos helps us build a shared understanding,” said Heather.

You can watch part 2 of the 4-part series of the interview above, and we have shared our key learnings from the conversation below.

Using video as the central aspect of the coaching process

The MQI Coaching model is a math-focused protocol that provides teachers with a framework for analyzing math instruction. The coaching model was validated by the research team at Harvard’s CEPR. What makes MQI and MQI Coaching such a good match for video coaching with Edthena is that the MQI process is strongly rooted in video reflection and video analysis.

The SparkNotes of this coaching protocol is that teachers compare their own teaching videos to two video examples from the MQI video library.

“The goal of our program is for our teachers to use video to self-reflect on their own teaching and use the MQI rubric as an instrument to guide their thought process,” said Heather.

This is a coaching model, so there are coaches involved in the process, too! After a teacher records her lesson, a coach picks the comparison videos from the MQI example set. And after the teacher analyzes and compares all three videos, the coach and teacher meet to unpack the observations and develop next steps for change within the teacher’s practice.

The coaching cycle is structured in five distinct phases: 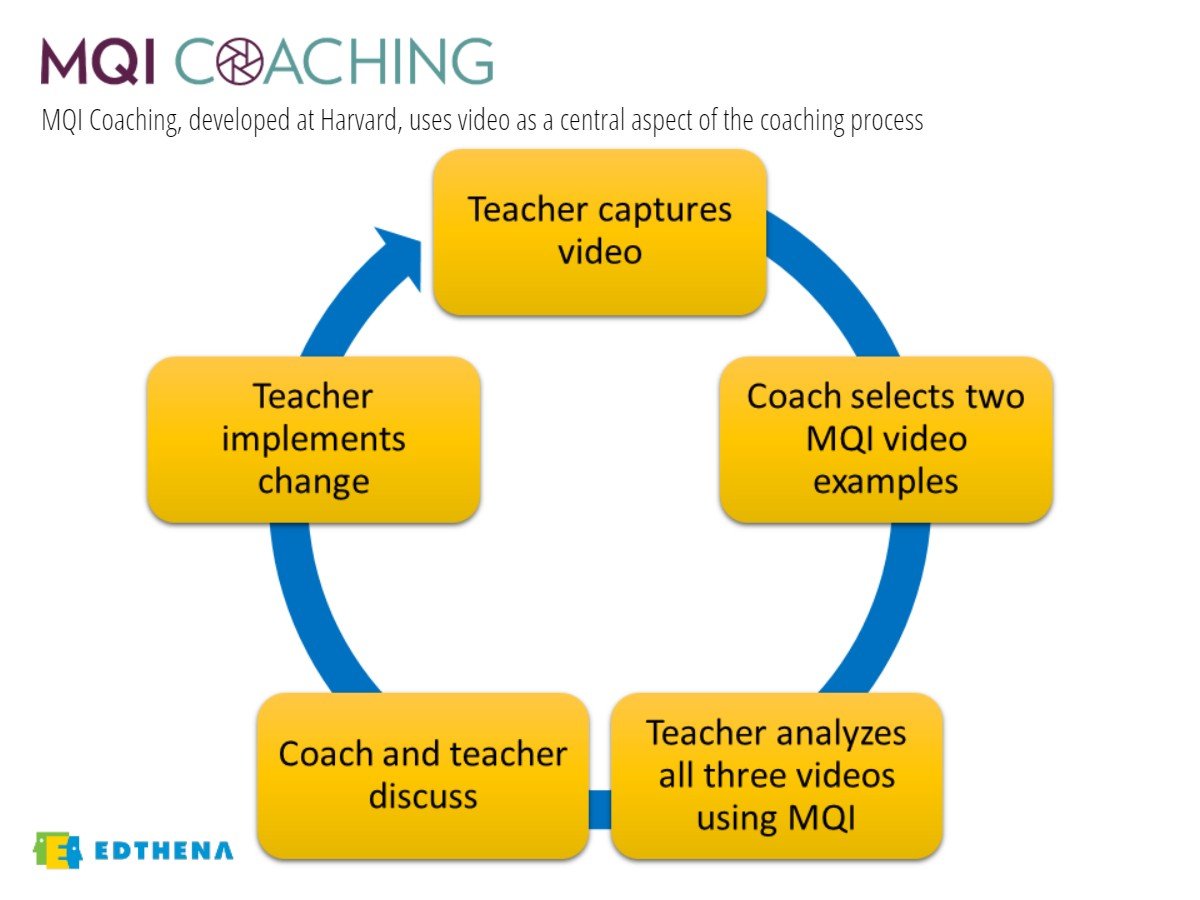 Educators often imagine that research-validated teaching rubrics used to describe “good teaching” are dreamed up in an office by academics who are much too distant from real K-12 classrooms. MQI definitely does not fit this profile.

In her interview with Adam, Heather describes how the inspiration for the MQI framework was originally through the viewing of classroom videos. MQI was, essentially, reverse-engineered from a massive collection of video recordings of actual teaching.

A team of educators started realizing that they “knew it when they saw it.” As they amassed a variety of examples, they were able to work backwards from the videos to develop the definitions of various math teaching practices that were likely to move students forward in their learning.

The MQI rubric provides a framework for teachers for analyzing mathematics instruction in four separate domains. Within the framework, there are scoring criteria that categorize the quality of instruction in each of these domains. You can access the whole MQI framework on Harvard’s CEPR website here!

Grounding teachers in the good, better, and best versions of their own instruction

Don’t look for “needs improvement” and “advanced proficiency” within the MQI Coaching process.

By learning to award scores and definitions for key elements of their own instructional practice, the teachers can compare one best video to realize one aspect of their practice that is considered “the best.” More importantly, they are also likely to identify gaps between their instruction and the best version to determine what and how they need to change.

“Teachers might look at their instruction and say, was that video clip an example of what should be considered the best instruction? If not, how can I get there? How can I plan instruction so that I can get the kids to do more of the mathematical thinking in class?” said Heather.

According to Heather, a key focus of the MQI Coaching cycle is to illuminate how teachers “heard, processed, and responded to their student’s mathematical ideas.” In order for this to take place, it is imperative for a teacher and coach to use video to describe, without judgment, what is happening in a classroom (or online learning environment).

“If a student is going through a pathway of mathematical thought, an expert teacher should be able to understand where the kid is going and then involve them in the mathematical reasoning of the lesson,” explained Heather.

Heather was steadfast in her support for using video within teacher coaching. “Video is really integral, we’ve changed the program over the years, but we will not go away from using video,” she said.

Although the MQI rubric provides a framework for analyzing mathematics instruction, this framework is itself not the most critical piece of the MQI Coaching model, according to Heather. In her view, the most important feature is how the MQI is used to focus a teacher’s own reflection and help create conversations.

The structured format of the MQI Coaching model creates routines for teachers and coaches. These routines help lighten the cognitive load and minutiae for both participants, and it allows them to focus on improving instruction instead of how to successfully structure a conversation.

It does take a deliberate effort on the part of the coach and teacher to follow a conversation protocol, but having the routines ultimately reduces the cognitive burden of trying to have an open and honest conversation.

Setting up procedures around how the teachers and coaches watch videos “organizes and targets the types of conversations the teachers and coaches have.” In Heather’s view, the formality of the MQI Coaching process and how the coaching cycle gets completed helps participants understand their roles and understand the expected dialogue within the coaching conversations.

The video examples that are part of the MQI library and used in the coaching cycle become a feature of the built-in routines which revolve around teacher self-reflection. It’s not enough that the videos exist. MQI Coaching depends on the careful way in which the example videos are used to drive a conversation.

“The power of using video is in having teachers reflect on their own instruction in a guided format,” Heather stated. “The MQI is the external instrument that calibrates the teachers to common ways of thinking about what constitutes good, better, and best instruction.”

All this talk of protocol might leave some worried that MQI Coaching is too rigid. In fact, that’s the opposite of what Heather hopes. In her experience, the protocol defines a regular process and helps teachers know their role as active participants in a dynamic coaching conversation.

Click here to learn more about the MQI coaching model, and if this topic interests you, watch more videos at PLTogether.org or read our most recent post with Laura Baecher on instructional coaching during the time of Covid-19.

AI in teacher PD? Check out the highlights from this recent Charter School Superstars podcast episode about how artificial intelligence is supplementing teacher professional development.

17-year teaching veteran Summer Workman was recently featured by eSchool News for her use of the AI Coach platform to improve her teaching. Check out the highlights of what she learned here.

Check out our highlights of the most helpful recent teacher reads, including supporting students’ productive struggle and prioritizing teacher self-care.