Video Uploading is as Important as Video Conversations

This post originally appeared on Education Week. It is authored by Edthena CEO Adam Geller.

Note: This article is from 2014, and we have more posts about the video tool.

But I thought Edthena was an online platform for video observation and feedback.

But Dave said that developing the Video Tool took a long time. How did you know investing the time would be worth it? Time is always in short supply at a startup.

Very true. But the decision to build the Video Tool as more than just an add-on came from several iterations of trying to figure out what we needed to do to add value for our users by solving their problems.

Ultimately, it came down to providing whatever we needed to ensure users could be successful with the entire video observation and feedback process. And it turned out that, the process was more than just how to interact with videos online. We had to help users get the videos online.

Many people are unaware that digital videos can be very large in size. Compared to the amount of bandwidth available, an uncompressed video could take days to upload. Thus, compressing videos before upload is a critical step to ensure users can be successful uploading the video to the internet.

If users can’t get their videos online, then your video-focused site is worthless. This is true whether you’re talking about YouTube, or Vimeo, or Edthena.

This compression problem is a tricky one. YouTube and Vimeo both provide extensive help documents about how to compress a video before upload.

When the first version of the Edthena platform launched to users at the beginning of the 2011 school year, we had a web application with an upload page. And a strong warning about needing to compress your video before upload.

Most of our customers planned to use Flip video cameras. This made it seem like solving the compression problem would be easy since we could provide instructions on how to click three buttons to compress a video using the inlcuded Flip software.

I’m almost not exaggerating about the number of clicks. It was definitely less than five.

But users could not and/or would not follow the instructions.

This meant that their experiences trying to upload the file to our server was often a headache. Or a failure. And this was making it tricky to get users to test the actual process of providing feedback of teaching online.

If There Isn’t a Solution, Build One

I spent a lot of time trying to figure out how we could better train users on the process to compress a video using a free or paid software program from the Internet. 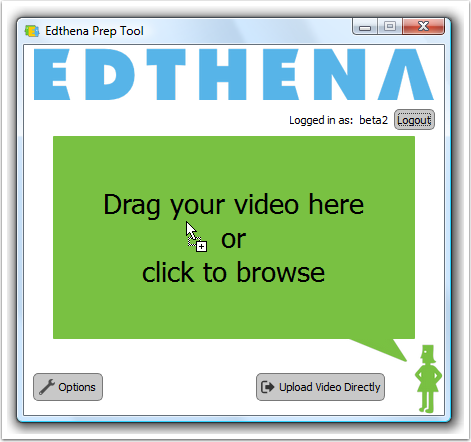 After discovering there was no good option, it became clear that we needed to provide a simpler and better solution. This meant we’d need to build an application that was installed locally on a user’s computer.

Releasing an installed application is MUCH scarier than launching a web application. Unlike a web site, once the code is released to the users and installed, it can’t be updated easily. You have to get it really right on the first try.

(Important context here is that Dave had not yet joined the company, so I was responsible for managing the design and development processes myself.)

In spring of 2012 we finished development of our first installable application. It was called the “Edthena Prep Tool” because you could use it to prepare your video for upload.

The Edthena Prep Tool offered drag-and-drop compression for all our users. There were no scary screens filled with unnecessary and complicated options. Just push the big button, and a very compact video file would be saved to your desktop and ready for upload to the site.

The response was extremely positive. For the first time, our partners didn’t have to worry about training their teachers how to compress a video. They just had to make sure they were using our Prep Tool.

We were providing the best-in-class commenting tools and an easy way handle the otherwise complex and cumbersome video compression process.

Success rates and satisfaction increased, but users were still having issues uploading the files. And if users can’t get their videos online, then your video-focused site is worthless.

It turns out that file size wasn’t the only problem. The technical limitations of a browser-based upload were making it difficult for high rates of success on the first attempt to upload the video.

The logical next step was to enable the Prep Tool to upload the video, too. This added a significant level of complexity, as the application on the user’s computer would need to communicate with our servers to get the right permission to store the videos.

In fall of 2012 we released a new version of the Edthena Prep Tool which compressed and uploaded videos. This was a game changer.

While still not perfect for all users and all video sources, this allowed nearly everyone to be successful most of the time. And the Prep Tool would automatically retry the upload for you if there was a connection error.

A side benefit of building user-authentication into our Prep Tool is that only valid users could benefit from the one-step compression process that we had designed and implemented. While we were flattered that the tool was being used to compress home videos for easy sharing on other platforms, it didn’t lock in the value for Edthena.

Because of everything we had learned during the course of two years, it was clear that we should invest a significant amount of Dave’s time into building a solution. 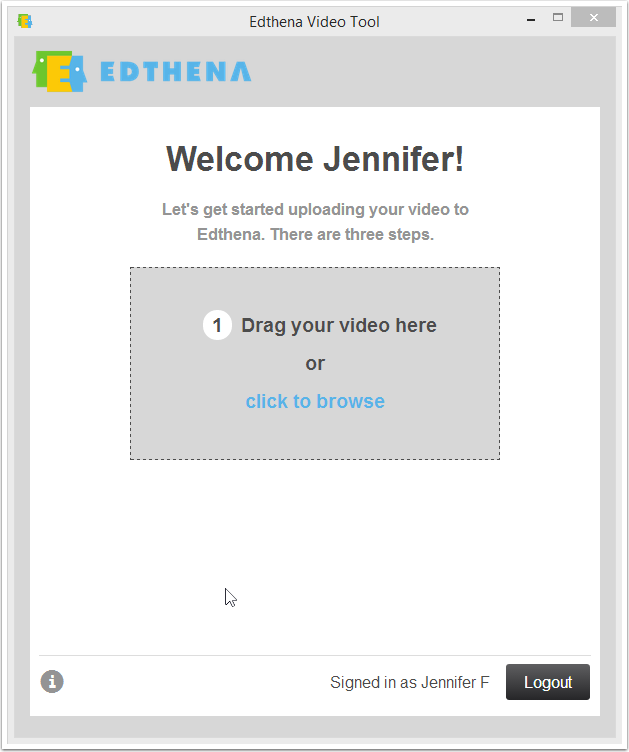 The result is that the new Video Tool launched with the ability to compress and upload a video with drag-and-drop ease.

Oh, and then there’s the big enhancement that we can constantly monitor performance and push code updates to each user’s version of the app without needing them to reinstall. Auto-updating applications (the way we built ours) is a very new technology.

The ability to send updates silently to users is a dramatic improvement from the earlier Prep Tool. In fact, I’d say the ability to release new updates in the background constantly is a huge strategic advantage.

Today we just send a code update to our server, and the application on each user’s computer automatically updates instantly. In comparison, to update the old Prep Tool required a new version of the application to be compiled, downloaded by each user, and then reinstalled for the enhancements to take effect.

As Dave mentioned, at first things were a bit rocky with the new Video Tool, but because we could constantly send performance updates, we’re now tracking at 98% success on the first attempt to upload and more than 99% overall success.

So you nailed it, right? You solved the users’ problem. They could get their videos online. Any video. Any length. Just drag-and-drop-and-walk-away. Finally the focus would be on the video observation experience!

To a large extent, this was true. But we found out there was still more we could do to solve the problems of our users. 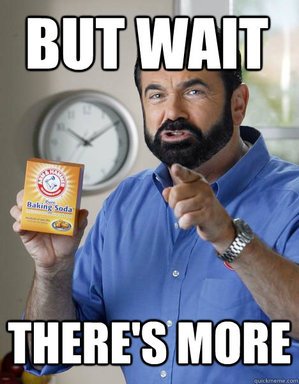 Because we made the upload process so easy and so successful, the new feedback was about the process teachers were experiencing before they put the video into the Video Tool.

Some organizations ask their teachers to trim videos to a specific length. This created complexity for teachers around needing to utilize other programs before they could use our Video Tool. And in comparison to their experience with our Video Tool, the process was too hard.

The solution? Design a way for users to trim videos quickly and easily.

And because of the way we built the Edthena Video Tool with automatic updates, we released the trimming feature last week with the utmost ease: It automatically appeared in everyone’s Video Tool on Monday night.

This is the feature Dave alluded to last week in his post.

So did it work?
Yes. Within minutes someone had successfully trimmed her video.

And did they fall in love again with Edthena?
Yes. Email kudos arrived the next morning.

Edthena CEO Adam Geller recently shared insights about the AI Coach platform with THE Journal. Check out these highlights about how the AI coaching process provides autonomy and privacy for teachers.

3 Skills and a Conversational Framework: What You Need for Better Instructional Coaching

Check out highlights of the most helpful recent resources for teachers and instructional coaches, including using questioning to give student feedback and leading effective PLCs.